Welcome to the Big House: iRacing Comes to Crandon 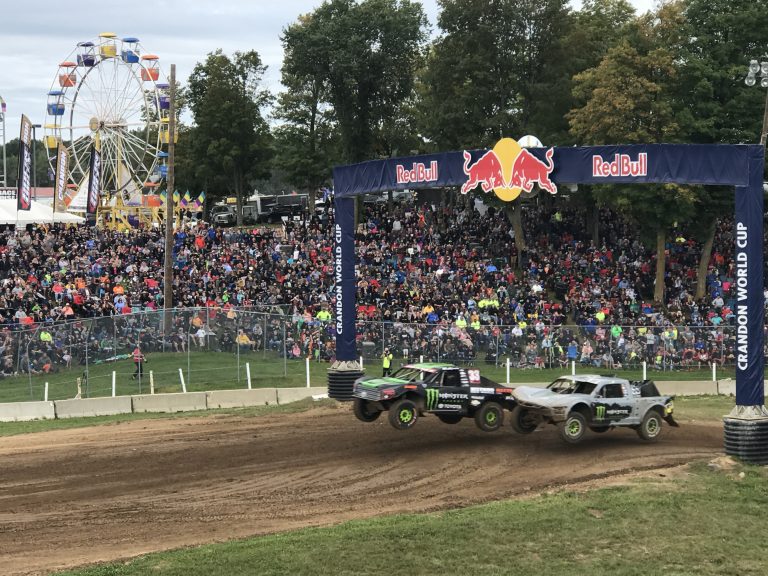 Just in time for the 50th anniversary of the World Championship Off-Road Races, iRacing made its way to Crandon International Raceway to scan the iconic track as the latest addition to our short course off-road track roster. A few days later, I showed up and got to see what the track was all about.

For those of you who don’t know me (or who don’t listen to iRacing Downshift yet… hint, hint), my name is Chris Leone and I’m responsible for a lot of the World Championship coverage here at iRacing. I’m also one of the closest people to off-road here in the office, as I spent five years at Red Bull Global Rallycross before moving on to both short course and desert off-road racing and working with Jim Beaver (whose network distributes Downshift, and who is now an eNASCAR team owner with us). It’s kind of ironic that I’d be known as the off-road guy in the office, because my career started at Bleacher Report covering NASCAR, so I’m kind of known as the NASCAR guy over there. Ironic, but whatever works…

I didn’t make it to Crandon myself until Thursday night, after our scan team had already wrapped up at the track. (Huge shout-out to Kevin Iannarelli and our team for persevering through some less than ideal weather there during the week.) I was fortunate enough, however, to get to see most of the track over the weekend, and let me tell you: when we launch this on the service, you guys are in for an absolute treat. 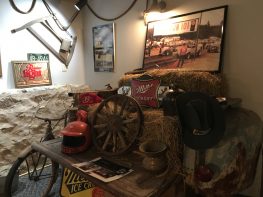 It’s always cool to go to an old track with tons of history. Crandon had relics of its past scattered everywhere.

There’s a reason why Crandon is the mecca of short course racing, and it’s not just because it’s the oldest track. It’s also the fastest, with some of the most exciting corners in the sport, and some of the most talented staff I’ve ever met running the show. It all comes together to create an event unlike any that I’ve ever been to in my life, and I’ve done everything from Formula 1 to X Games at least once. And honestly, the people watching is probably the best you’ll get anywhere in North America. I didn’t have a chance to make it out to Jurassic Park, the track’s infamous campground, but if you like camping at a racetrack, that one should definitely be on your bucket list.

The most unique part of Crandon from a racing standpoint is its signature land rush start. Think motocross minus the gates—dozens of trucks, or buggies, or whatever else you’ve got line up side by side, and all launch into the track’s signature Turn 1 at the same time. Getting the holeshot at Crandon can be the difference between a weekend you’ll never forget, or one that you’ll want to forget immediately. 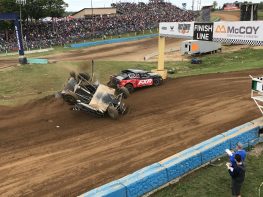 This one… looked like it hurt. And yet the truck was back on track for the World Cup race later that same day!

But I watched most of the biggest moments of the weekend from the roof of the gazebo on the inside of the final corner before the finish line. This slightly banked, sweeping right hander was the difference maker in many of the biggest races of the two-day weekend. We saw Kyle LeDuc flip and come to a rest just short of the finish line in Sunday’s Pro 4 World Championship race. We had a front row seat for a five-truck incident that ended Bryce Menzies’ hopes of winning. And we even saw an Ultra 4, heavy-duty off-road vehicles built to tackle courses that include rock crawling, flip and bounce in front of us on Saturday night.

All the credit in the world goes to the folks who build these vehicles—not only was everybody OK after the three wrecks I just mentioned, some of them even drove away, or kept on racing over the weekend. Motorsport suffered a great loss in Spa over the weekend with Anthoine Hubert’s passing, so it was a great relief to see everyone either climb out or drive off. 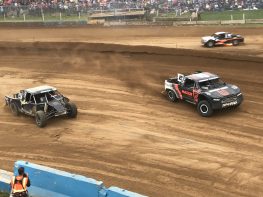 Here’s RJ making a pass on Jeremy McGrath with his Pro 4… well, what was left of it, anyway.

RJ Anderson allowed us to scan his Pro 4 and Pro 2 trucks for use in iRacing, and I was lucky enough to sit down with him for a future episode of iRacing Downshift. It wasn’t a surprise to see RJ at what may be the biggest event in the history of the sport, but Crandon isn’t actually on the Lucas Oil Off Road Racing Series schedule. See, short course has always been fairly divided regionally: LOORRS runs in the southwest, and Crandon is one of the tracks that makes up the Lucas Oil Midwest Short Course League in the midwest. As you can guess from that series name, the two championships do share common rules these days, with the aim of facilitating more opportunities for racers in both regions to compete across America. It wasn’t always that way, but everyone is working together to move the sport forward, and you see that in a number of ways—not the least of which includes LOORRS launching on iRacing with us in June. 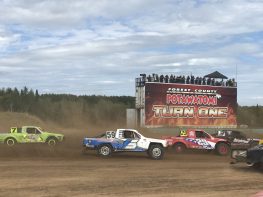 You guys are gonna love throwing it into Turn 1 at Crandon.

Anyhow, RJ was one of just a handful of LOORRS racers to go to Crandon for its first event of the season in June, so while pretty much everyone from both series ran Sunday’s non-denominational races, he came into World Championship weekend with a leg up on some other big names. That experience paid off in a big way in Sunday’s World Cup race, which pits Pro 2 drivers (with a head start) against Pro 4s in a no-holds-barred race for $50,000. RJ got spun around in the aforementioned five-truck incident, but he turned it around and began picking off Pro 2s one by one. In the end, the track seemed to favor Pro 4s, but it wasn’t until the very last lap that Anderson caught Keegan Kincaid and made the winning pass to take home his first Crandon World Cup.

The less detail I go into about the afterparty, the better. But I will say this: if you’re in Crandon on Labor Day weekend and partying with the racers on Sunday night, be careful about the shirt you wear. #SleevelessSundays are a thing, and I now own what I believe to be the first official iRacing sleeveless polo. But when even a certified badass like Brian Deegan gets the sleeves to his hoodie ripped off, you know there was nothing I could’ve done about it!

Thanks to everybody who made my first trip to Crandon awesome: Marty Fiolka and the whole Crandon team for the support and access, Jim and his family for flying me out and giving me a couch to crash on, RJ for the interview (and for remembering me from my Ricky Bobby suit days), Parker and Brian Retzlaff and the Ponsse Racing team for all of their help, all the racers, and the tens of thousands of fans who packed the grandstands and the hills to watch the action. Besides RJ, I’ll have on-site interviews with Marty and Parker (our eNASCAR IGNITE Series points leader, who grew up 20 minutes from the track… small world, right?) on coming episodes of iRacing Downshift. Hope you listen!