In the first round of Season 12, it was Ajira Racing who dramatically clinched victory from Edge Esports and a late-charging Dennis Jordan, the winning margin just over a second in the end. Singularity Racing were winners in LMP2 at Silverstone, while in GTE it was Zansho who took the honours. That was a 4 Hours affair however, this time we would race for 2 hours longer at the Sepang Circuit, a technical and testing track where tyre wear would be paramount.

In Qualifying, it was the #87 Zansho BMW that took
pole, again asserting their dominance on that class qualifying ahead of Deuces
Motorsports Club in second and one of the sister Zansho cars in third, which
was coincidentally the finishing order from Silverstone. In LMP2 it was also
much of the same, with Singularity Racing leading Wave Freem eSports but this
time it was the other Wave Freem eSports car in third, looking to take revenge
after a poor show in Round 1. In the Hypercar Class, it was Erhan Jajovski with
a stunning pole lap to take charge ahead of Marcel Csincsik with the
championship leading Ajira Racing car way down in 6th.

Before hostilities began however, there was a touching and emotional tribute from Black Hawk Racing and indeed the whole VEC grid as we paid our respects to the late Josh Hoare who sadly passed away on the 14th of October. The Porsche, fitted with Josh’s number 19 and special messages from his teammates, led the field around for a lap in honour for their teammate, friend and fellow competitor. 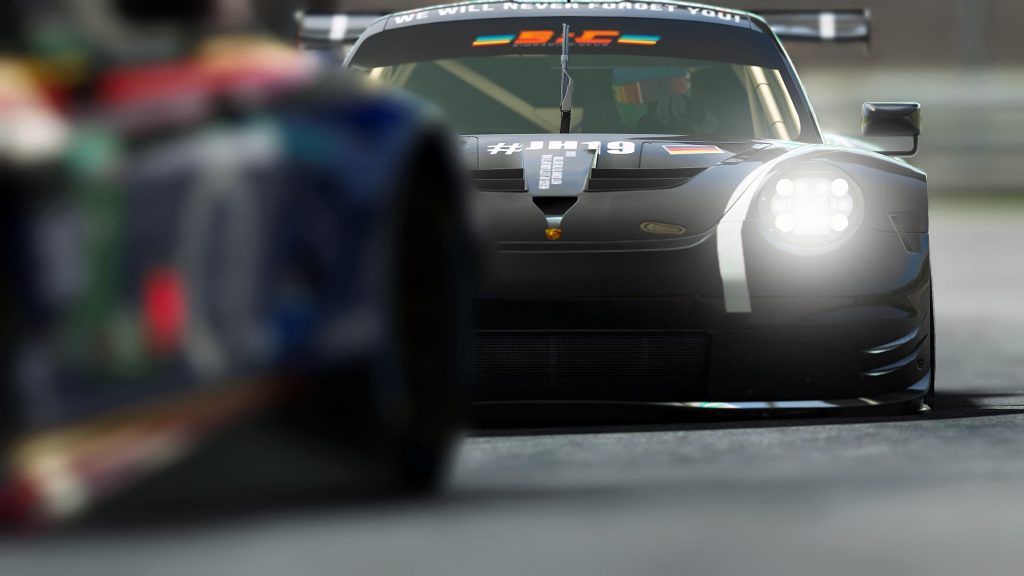 With heavy hearts, the field rolled around for the
start which was very clean up the front, with Triple A eSports leading Black
Hawk Racing around Lap 1. In GTE, there was a similar calm apart from the
wayward Daniel Serra who came unstuck at the tricky Turn 14. Adam Baldwin also
lost a place to the second Zansho car to give the team a 1-2 as they completed
lap 1 but in his eagerness to get the place back Baldwin dived down the inside
at Turn 4 unsuccessfully, turning them both around and dropping them down to P7
and P14 respectively.

Traffic would become the selector 10 minutes into the race, as the Triple A eSports car was nursing a 3 second lead going into the GTE traffic, but came out with a commanding 6.5 second advantage. Meanwhile in LMP2, there was a big incident involving both T3 Motorsport cars. While being lapped, the Team RSI Porsche let a Corvette and an LMP2 car by, but didn’t realise there was a third car coming through, which ended in big contact with Heiko Kolvenbach and then the other T3 Motorsport car as they both speared across the road at Turn 9.  This resulted in all 3 pitting and coming out of contention. 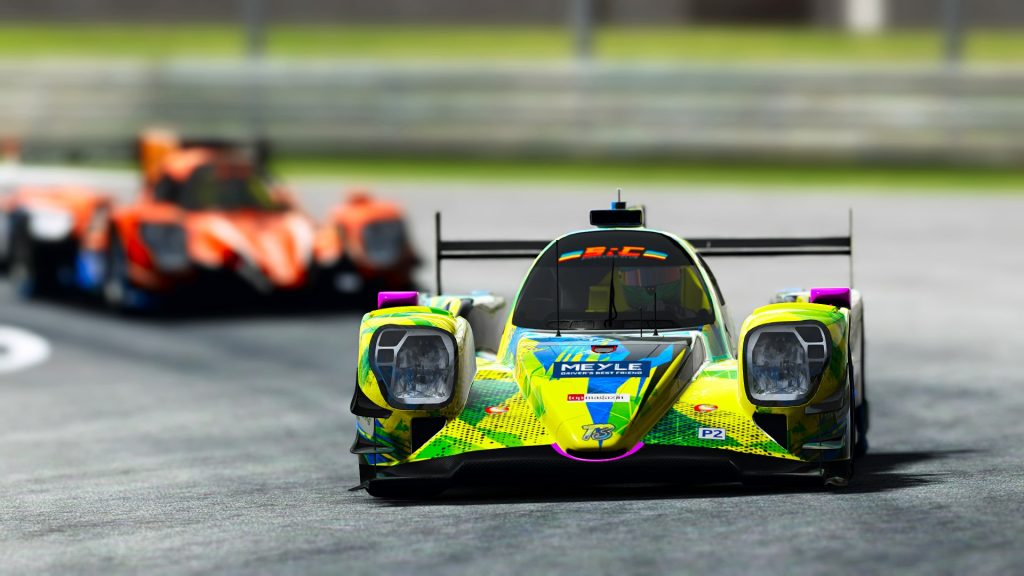 As the LMP2 cars were trickling into the pits for their stops, Yuri Kasdorp had a big wheel failure meaning that his car headed straight on at Turn 9. He managed to stop the car before hitting the wall, but Singularity Racing were way down the order, and later retired. The hour mark approached and so it was time for the GTE cars to hit the pit lane. When they rejoined, it was still a Zansho 1-2 with Eric Schmieder in P3 having taken over from Adam Baldwin who recovered well from his spin. Concurrently on track, there was a feisty battle happening over P2 overall, with Borja Milan barging his way past Marcel Csincsik at Turn 2, allowing Jernej Simoncic to close up and pass at Turn 9.

Jajovski had build up a huge 21 second lead in his
first stint and retained this when he exited the pits, leaving Simoncic in
second and Milan hounding him just behind in third. Despite two pit stop
cycles, the LMP2 lead battle was still raging between Matthew Beavis and Pim
Van Ark, with the former coming out on top for now. An incredible battle in GTE
transpired between Alex Brautigam and two BMW’s for P4, but it unfortunately
ended in a spin for Felix Antoine Fortin as he pinballed around multiple cars
at Turn 1. At this point the race really settled down, with the drivers closing
up into neat little 2 car battles to watch with intrigue, for example the
battles for P2 and P4 overall.

Milan’s battle was interrupted however, as a technical
issue dropped the 1Aco car down 3 spots to P5 as they started Hour 3. Another
round of pitstops in GTE meant more of the same, this time with Oliver Fortin
driving the leading car after a driver change, and the recovering Zansho BMW
back up into P4. Hany Alsabti took over the leading Triple A Esports McLaren,
while Nico Barclay got behind the wheel of the 1Aco Hypercar. Dennis Jordan
also got into the Edge Esports McLaren and set about closing that 34 second
margin to Triple A Esports. In GTE, the Zansho 1-2 swapped around, now Dan Kell
was leading Fortin, but this only lasted a mere 20 minutes before they reversed
the order.

Following contact with the 1Aco car, Black Hawk Racing were forced to make an earlier stop and this dropped them down the order after a good first half of the race. As the light faded, Singularity Racing’s luck also faded as their leading LMP2 hit technical issues and dropped down to P8 from the lead. James Johnson in the third Zansho BMW dropped back during his stints, leaving Kevin Jaeger and Martin Dyrlund to battle over P4. It was a battle that the Singularity driver prevailed in and he was able to pull away over the next few laps. 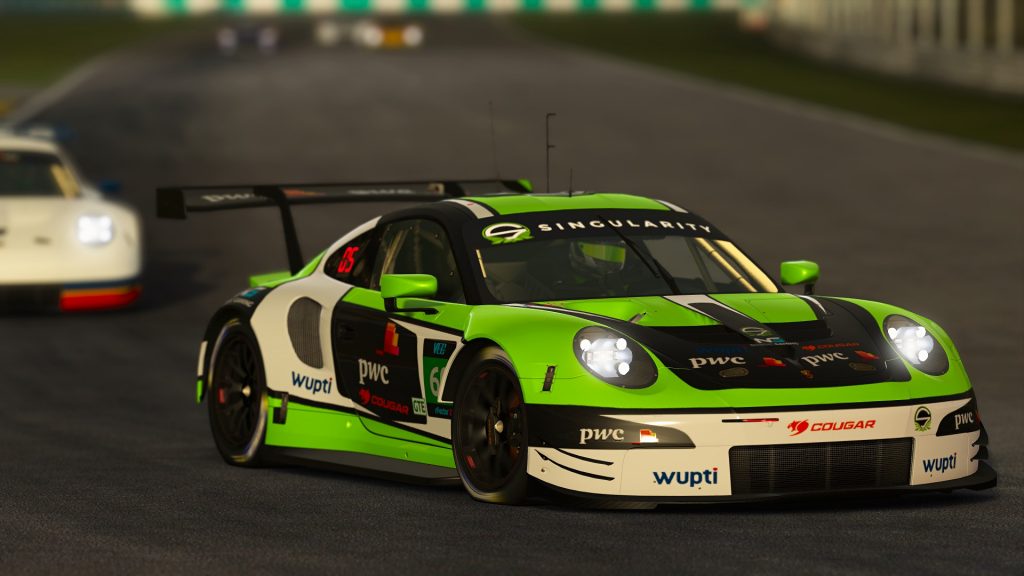 Felix Antoine Fortin continued his bad luck with an unsuccessful overtake and a spin on the same lap, putting his Zansho car way down in P8. At the happy end of the order, Deuces and Zansho were at it again, this time the Porsche was trying to break up the Zansho 1-2. This was the main entertainment for the next hour, as the gap fluctuated between 3 seconds and nose to tail. The T3 Motorsport LMP2 squad continued their hatred for Turn 9 with another incident, this time being rear-ended by a Porsche and losing their rear wing for the second time in the race. Singularity Racing were staging an impressive comeback, with Rory Macduff getting up into 3rd after a very physical battle with Augusto Arias. They would be knocked back again however, with a drive through penalty for contact with James Johnson. 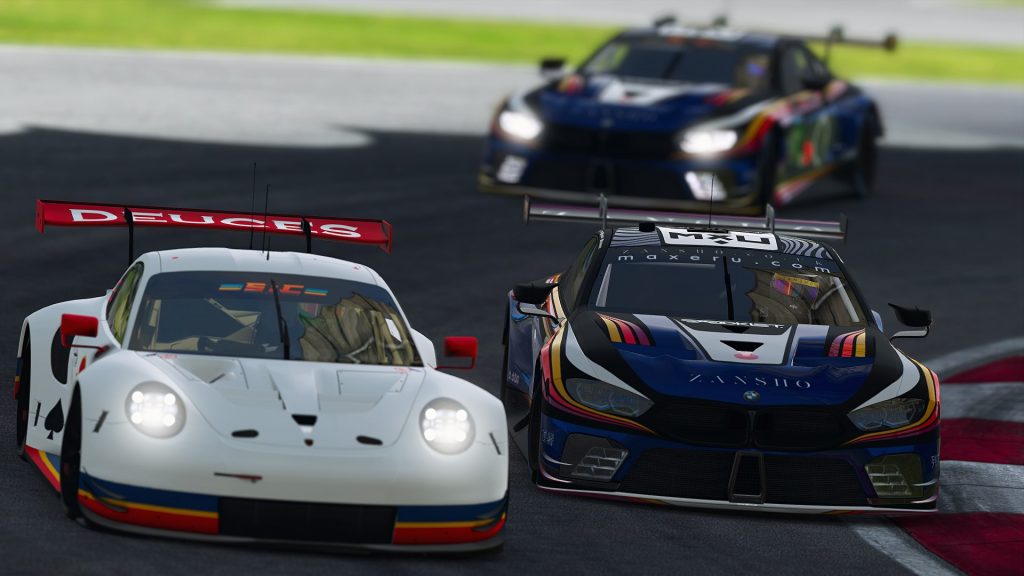 Unsurprisingly and for the second race in a row,
Dennis Jordan was the last to stop in the Hypercar class and, due to a
fantastic strategy with a no tyres stop, when they came out they had emerged in
the lead of the race with a margin of 8 seconds. However, the lightning quick
Erhan Jajovski was hunting him down. It was a gap that quickly came down,
possibly due to the Edge Esports car struggling in traffic, and Jordan was set
for a long 29 minutes holding the Triple A Esports driver off. A mere lap
later, a huge divebomb settled the battle with significantly more grip, and on
Lap 182 the lead of the race was pretty much settled. Or so we thought…

A spin for Erhan Jajovski courtesy of the HGEsports LMP2 at Turn 9 put him back behind Jordan to resume the battle that everyone thought was over a few laps earlier. An enthralling and action-packed battle ensued. Contact with each other, huge near misses with other cars amongst other things kept fans on the edge of their seat. Triple A Esports won back the lead however, with a move into the final corner that was completed at Turn 1. Jajovski didn’t exactly run away initially, but once the checkered flag was being readied it was approaching 15 seconds. 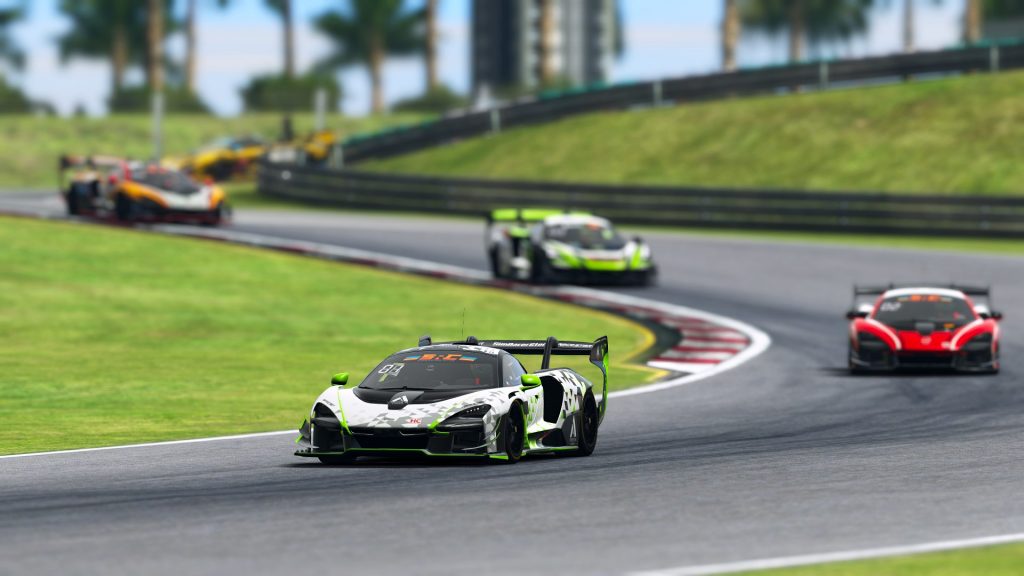 Meanwhile at the front it was Triple A Esports who
took the victory from Edge Esports who notched up another marginal second
place, with 1Aco coming home third. In LMP2 it was Wave Freem Esports with a
nearly 40 second lead to take the win from VRC One. HYDR Racing came third,
improving on their 4th place last time out. In GTE it was more
Zansho and BMW domination with a second win for #87 and a 1-2 finish, with the
delayed Deuces Motorsport Club Porsche coming home an impressive third. It was
an ultimately fascinating round at Sepang even without the weather, the
strategy and racing more than delivered the goods. Make sure you catch the next
round of the VEC at the Nurburgring for 8 Hours of action on December the 14th.