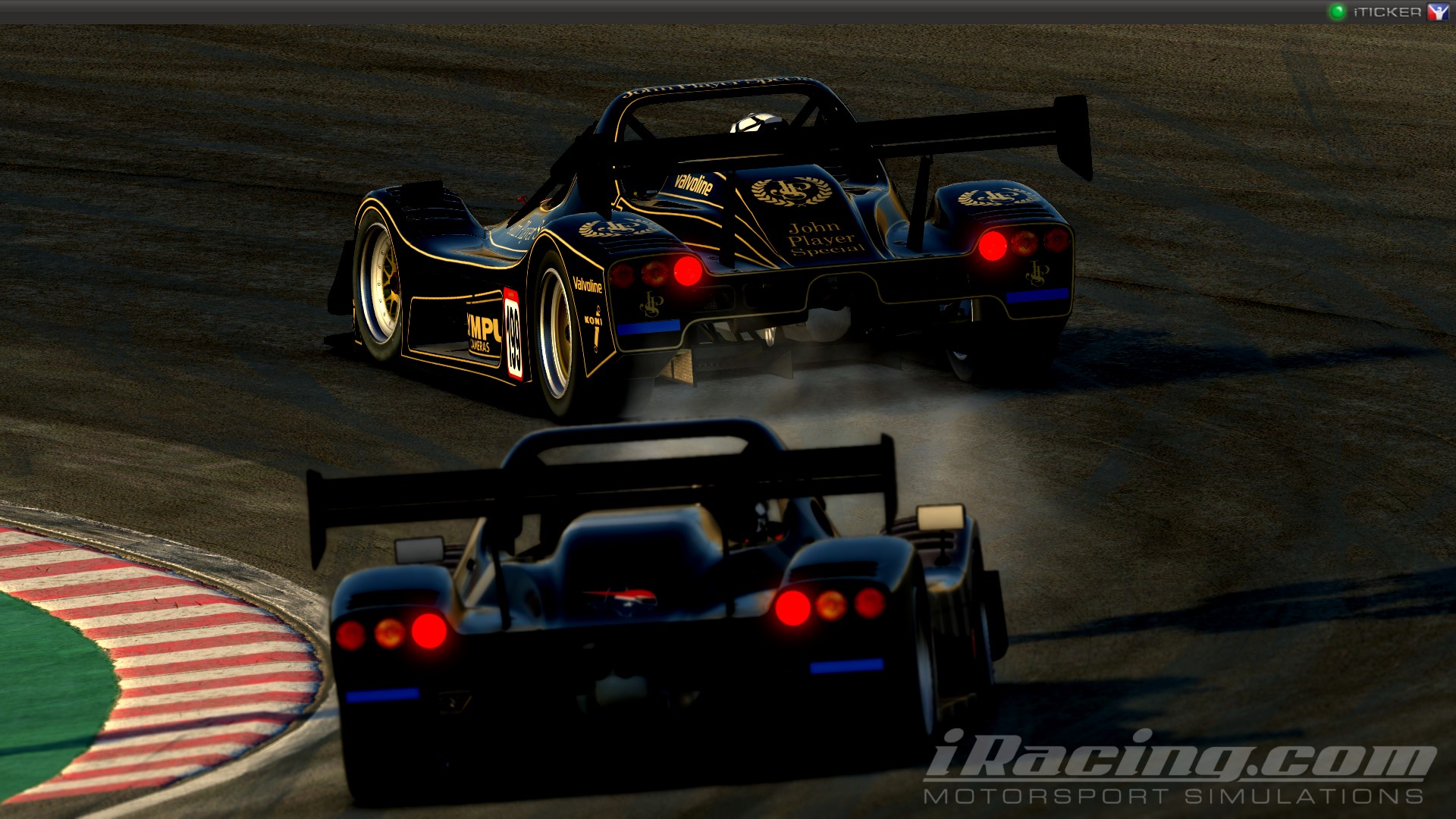 Look at him running away from the other cars, ha ha ha!

This week we dropped in to Tsukuba Circuit, or as I like to call it, Tscuba Steve Circuit. We ran a test race here a couple weeks before the beginning of Season 20 and made one fatal, really fatal for some, mistake. It was waaaay too dark for the number of cars on this narrow track.

Buckle up kids, this is a long one.

So this time we did a better job of choosing the time of day for our race and ran at sunrise. The narrow track and minimal runoff areas still caused some issues for those that made small mistakes that at many courses would have been easily recoverable if there weren’t walls just a few feet away from the track itself. Press “F” in the comments below for those that didn’t survive the race. 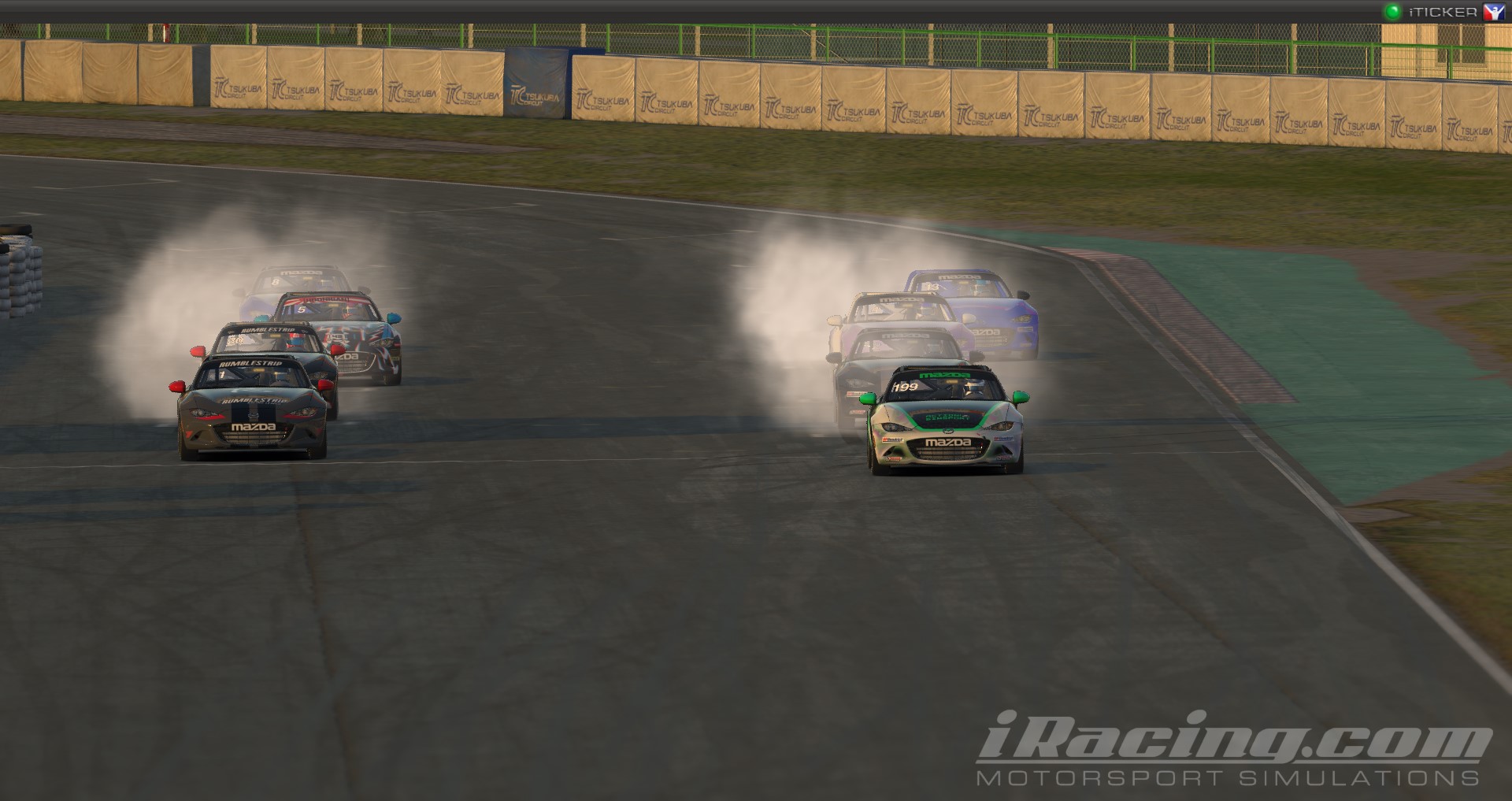 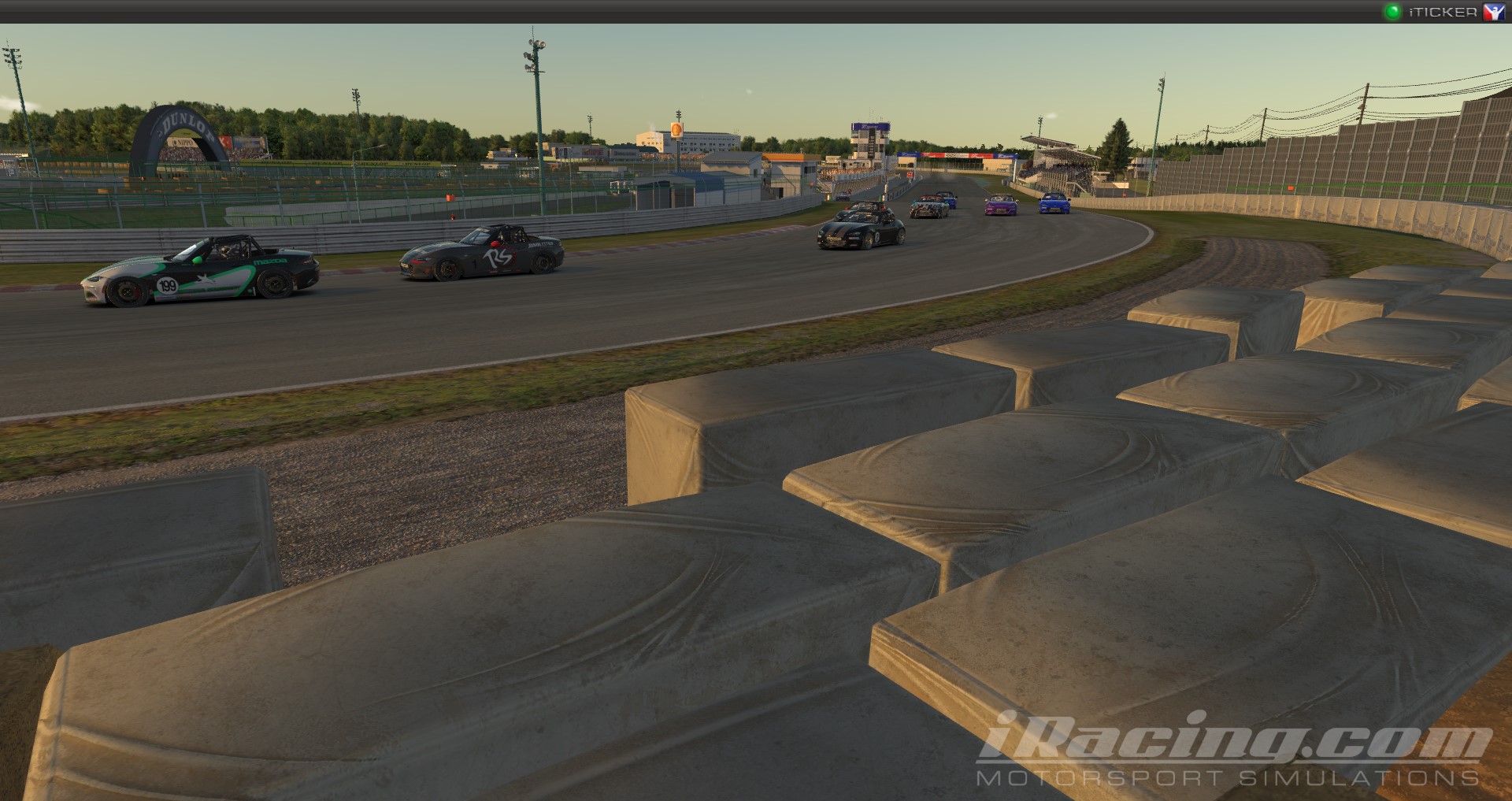 Oh, did I mention that we also run Miata’s? Yeah, we’ve got them MX-5’s bro. A sprint race is held just before the main event that many like to join as a quick way to get loosened up for the main race and do some fun racing without the stress of a championship to worry about.

I am going to just make a wild ass guess as to who won the race. Jake. Just checked, yup, Jake is winning all the things right now. SOMEONE MUST STOP HIM BEFORE HE TAKES OVER THE WORLD!!!

Y’all didn’t come here to read about Rookie Mazdas though, you want to know how the main event went. Well, it went surprisingly well. We had 15 cars start the race, 14 cars made it to the second lap, 13 made lap 3, 11 made it to lap 9, and 8 cars finished the race. So attrition was bad, but despite the retirements the race was actually very clean. The 8 that finished had only a few incidents each and most of the retirements happened after only a single off track excursion that utilized the barrier walls to bring the momentum to an abrupt halt.

Let’s talk about qualifying for a moment. You all know the words to this song so sing along ok? Jake Feinerman took pole in the Radical, and Kevin Binkley took pole in the Cadillac, all the doo dah day. Ok, Shawn Noble grabbed pole position at Watkins Glen but you see my point right? Where is my success ballast iRacing? 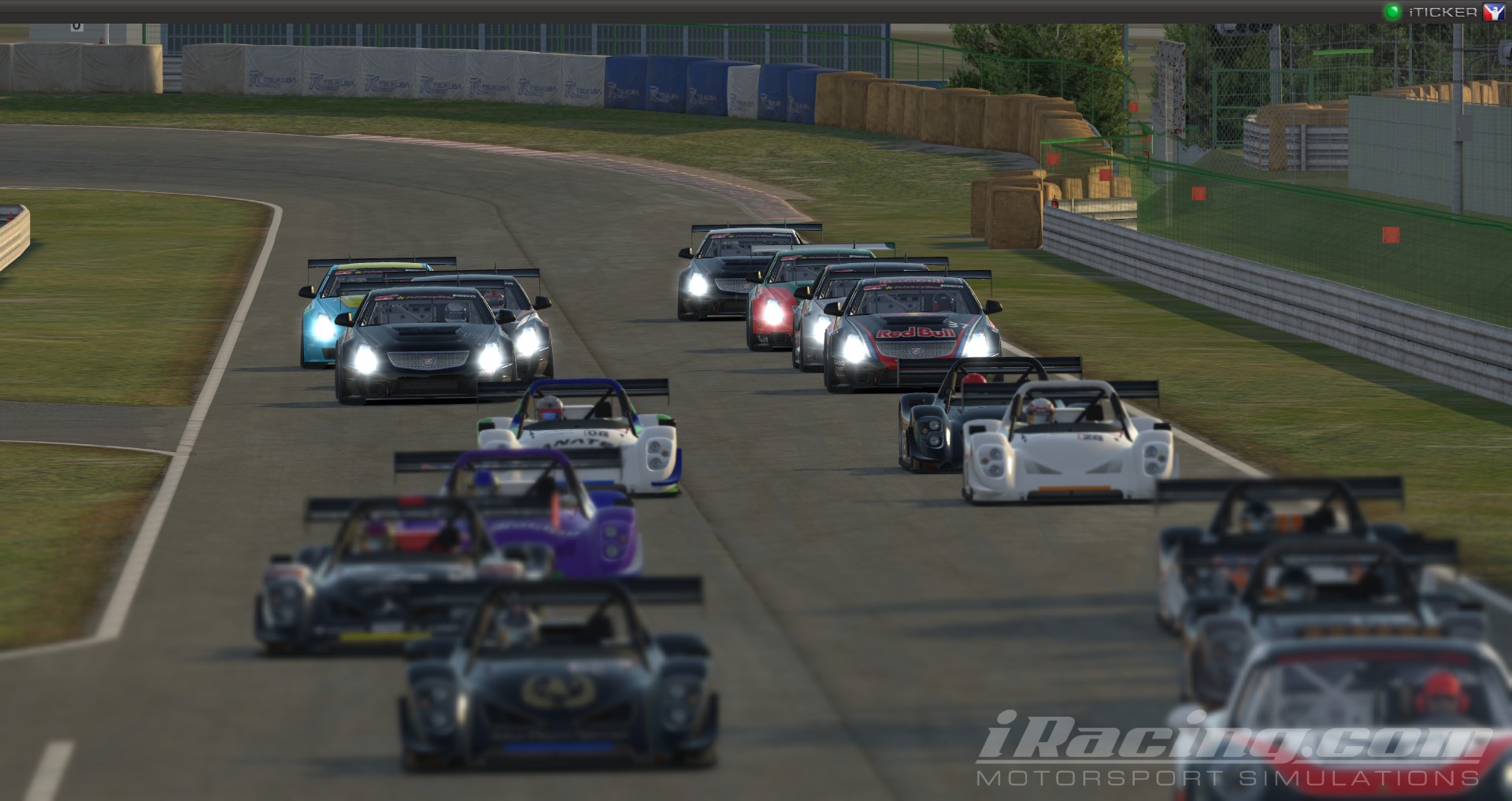 The race started off with Jake and Leif Peterson flew away from the rest of the field immediately and pushed each other around the track for the first half of the race as if they were bolted together with Leif firmly affixed to the bumper of Jake’s Radical. Just after the halfway point of the race Jake fell off the track into the grass and Leif took over the lead and while slicing through traffic he was able to maintain a small gap to Jake. A few laps later Leif found himself in a similar situation and fell off the same corner Jake did earlier which allowed Jake to retake the lead. 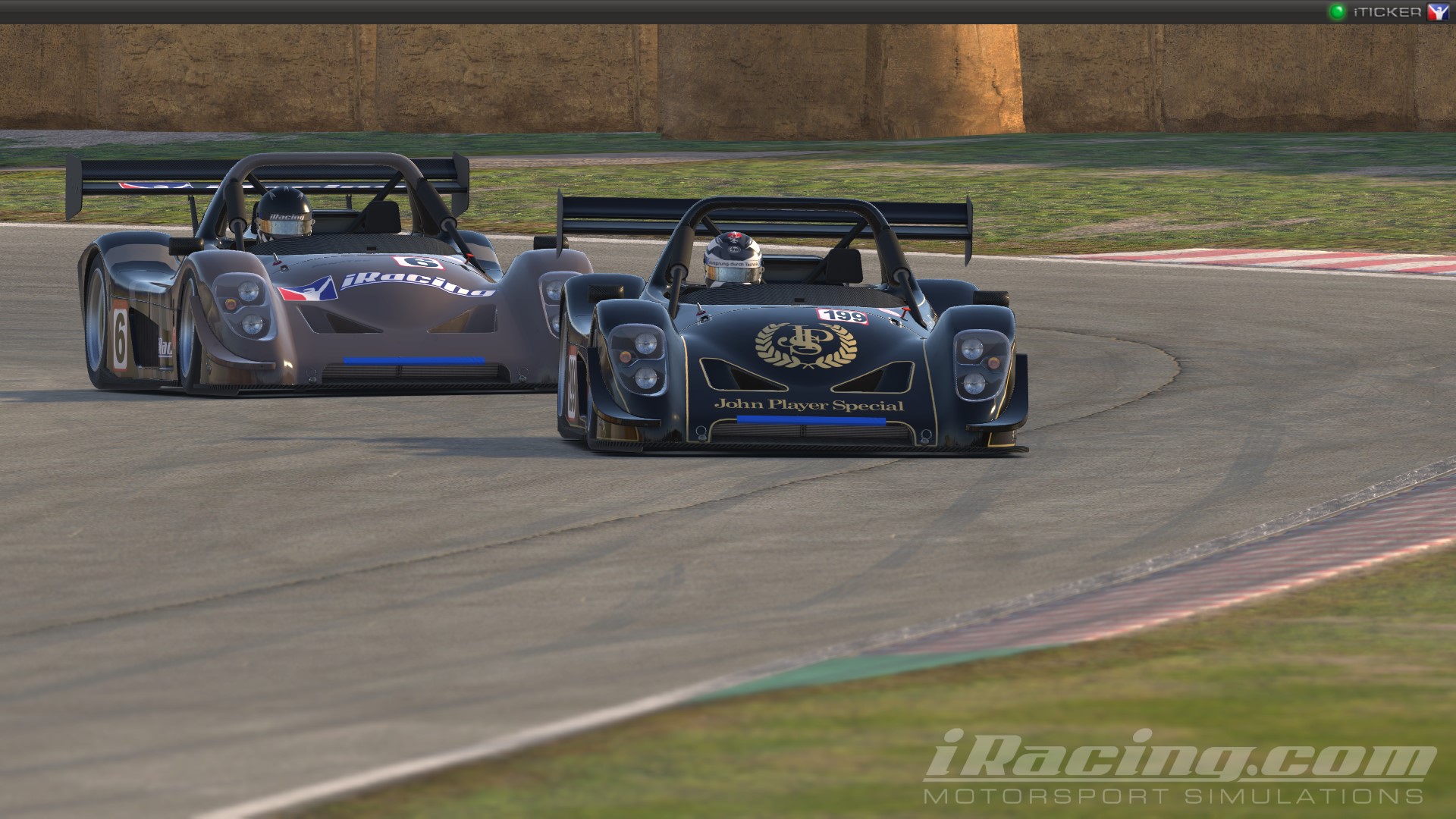 Toward the end of the race Leif was working to overtake the lead battle in the Cadillacs and had a bit of a brown moment while trying to brake late for a corner and found himself slicing gracefully between the 1st place and 2nd place Cadillacs and somehow getting away with only a tiny amount of wing damage. When the checkered flag dropped, Jake Feinerman was 1st over the line with Leif about 4 seconds back. John Dykstra took the final step on the podium with a quiet and stealthy march to the end of the race. 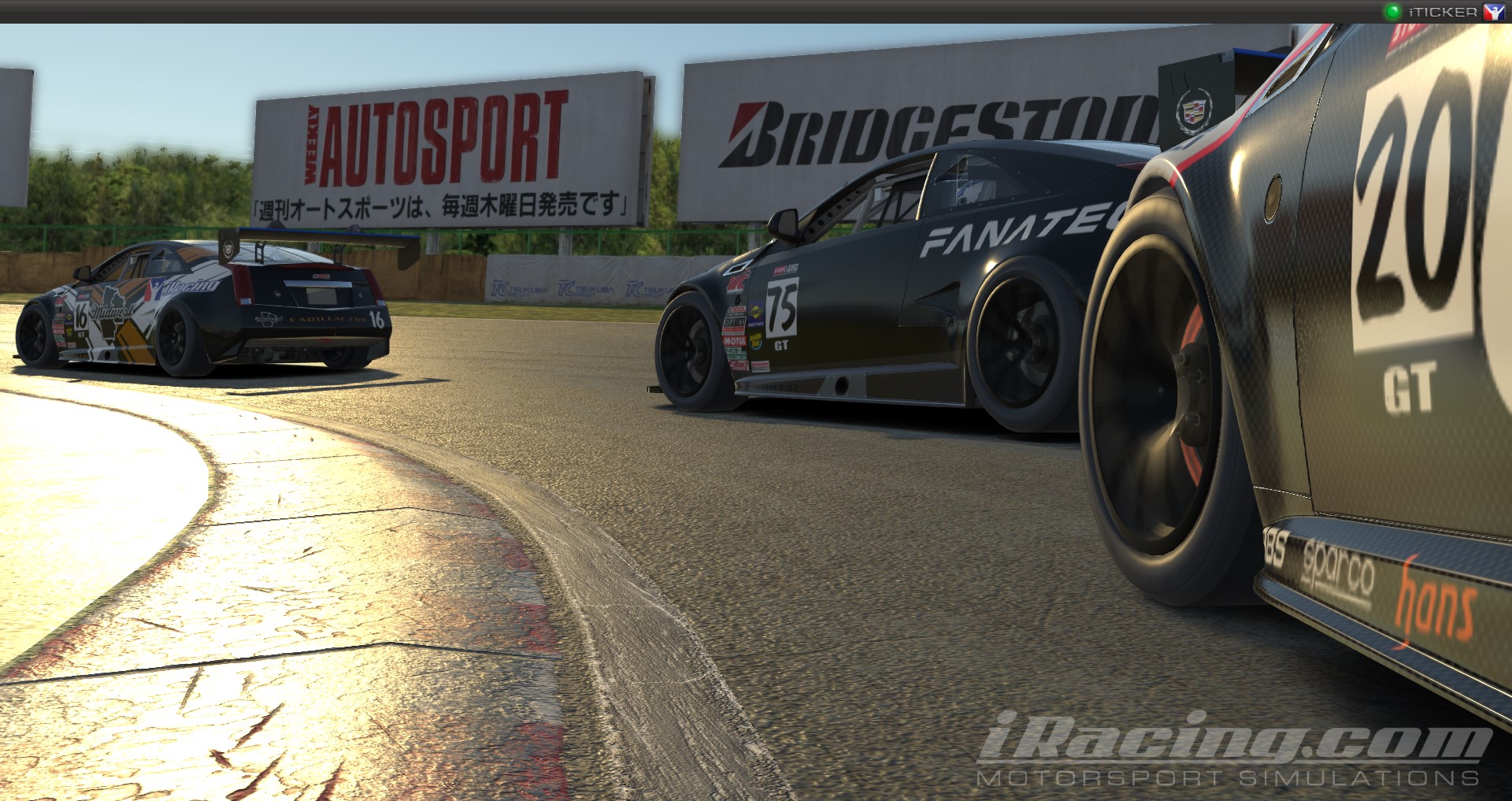 I said it was a clean battle for most, and it was, but most of the casualties were American iron. We had seven Cadillacs start the race and only 3 finished. Congrats to Jeffrey Lacey (1st), Kevin Binkley (2nd), and Darren Kuehn (3rd). The entire field that finished in the class was on the podium.

Jeff spent the entire race staring into his mirrors and seeing nothing but Kevin’s front bumper for the entire race. Darren’s race was much like John Dykstra’s in that he silently worked his way through the field and survived to finish on the podium.

The fastest race lap in the Caddy was by Tyson McEvoy who put down a 53.894 in the race before a wreck took him out of competition. He was the only driver to get into the 53’s during the race and only missed the Kevin Binkley’s qualifying pole time by 0.4 seconds. 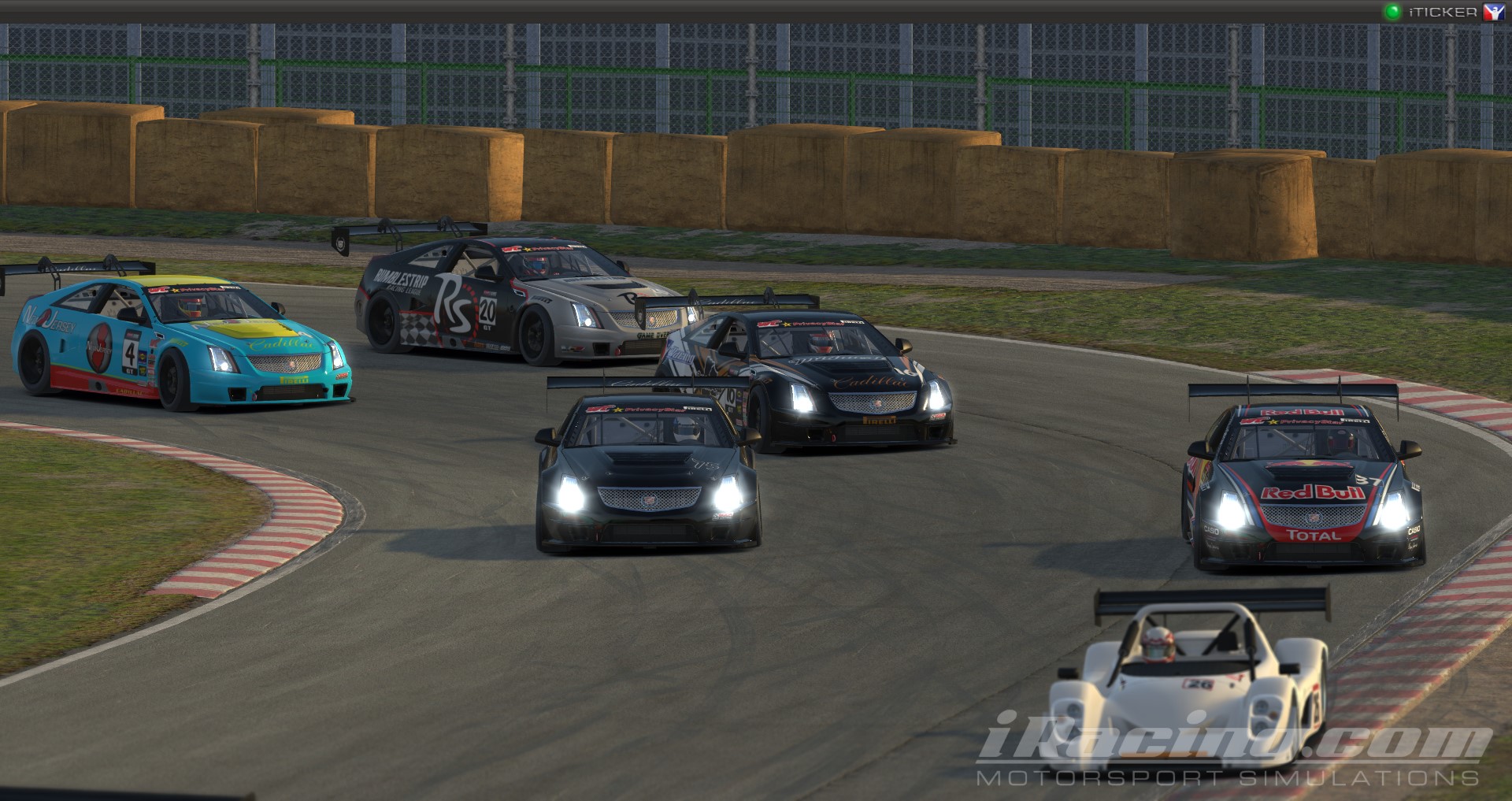 Great racing everyone, time to get ready for our fourth race and second Japanese track, Okayama International Circuit.
April 4th kids, don’t forget to ask mom and dad if it’s ok for you to go and we hope to see all of you there. Thanks again to Darren Keuhn for the pretty pictures.